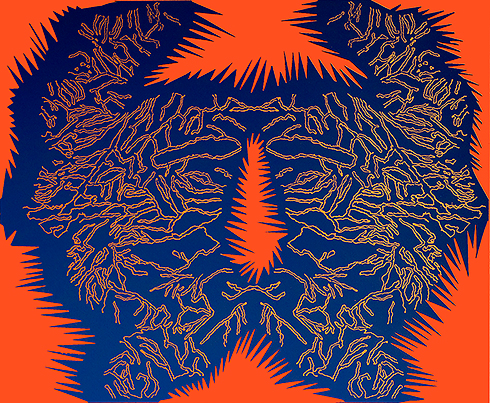 Glasgow Print Studio is pleased to present the fifth in the series of exhibitions bringing together the outstanding work of well-respected Royal and Royal Scottish Academicians.

Sam Ainsley is an artist and teacher and until 2005 was Head of the MFA Programme at Glasgow School of Art. She has forged a remarkable career within the visual arts sector nationally and internationally. From 1985-1991 she taught on the Environmental Art programme under David Harding’s leadership when she then co-founded the Master of Fine Art course. She has since worked collaboratively with David Harding and Sandy Moffat as AHM and continues to work independently in her studio.

She is a respected and published spokeswoman for the visual arts and her own artwork is in a number of public and private collections nationally and internationally. Ainsley has contributed to a broad range of visual art initiatives in Scotland and has served as a Board member on many arts organisations. She has exhibited in and curated independent exhibitions and undertaken residencies in numerous institutions and arts organisations across the USA, Australasia, Europe and the UK. More recent presentations of her work include ‘New Scots’, RSA Edinburgh,,“Atlas of Encounters” at I Space Gallery, Chicago and Athens, “ Live your questions now” and “Studio 58” Mackintosh Museum, GSA and “After Growth and Form” at Glasgow Print Studio. In 2017 she was invited to have a one person exhibition at An Tobar Gallery on the Isle of Mull. A full colour catalogue is available.  Ainsley was also represented in two recent exhibitions in Edinburgh and Glasgow to mark the 30th anniversary of The Vigorous Imagination, a landmark exhibition held at the Scottish National Gallery of Modern Art in 1987. She was also elected to the Royal Scottish Academy and was inducted into the “Outstanding Women of Scotland” by the Saltire Society in 2017.

Kenny Hunter studied sculpture at Glasgow School of Art between 1983 and 1987. He has exhibited extensively in Britain and Abroad including solo exhibitions at Arnolfini 1998, Scottish National Portrait Gallery 2000, CCA 2003 , Yorkshire Sculpture Park 2006,Tramway, 2008 and GENERATION 2014. Hunter has also created a number of high profile, public commissioned works in including; Citizen Firefighter, 2001, outside Glasgow’s Central Station, Youth with Split Apple, 2005, Kings College, Aberdeen as well as  iGoat  2010 in Spitalfields, and “Blackbird (the persistence of vision)” in Leicester Square. This year he has recently installed the Southwark Memorial to War and Reconciliation in Walworth Square, London. In 2015 Kenny Hunter was given the role of Programme Director for Sculpture at Edinburgh College of Art. His work is represented by Galerie Scheffel in Germany and Connersmith in the USA.

The language of the monument and of civic statuary is the clearest artistic expression of what Karl Popper identified as historicism; that is to say, the general belief that history must have a plot, a destination, or at any rate a meaning. By articulating the historicist language of the monument within the postmodern climate of reinterpretation, my work seems to invoke the clarity and certainty of its stone and bronze predecessors. Yet, on closer inspection, each work appears as an open question, a homage to doubt. As the Russian filmmaker Andrei Tarkovsky has said ‘the purpose of art is not to propose solutions, but to set problems in their requisite depth.

“Although I derive inspiration from the past, the subject matter I use draws upon contemporary popular culture - its morals, politics and belief systems. The use of coloured plastic also serves to locate the work within the present and opens up new sets of associations.

To reiterate my works are hybrids that fuse sculptural orthodoxies with post modern culture. Their aim is to question certainties and stereotypes, introducing a variety of fact and fiction into sculpture that is descriptive but not representational of the ‘real’ world.”

Jane and Louise Wilson were born in Newcastle and studied respectively at Newcastle Polytechnic and Duncan of Jordanstone College of Art and Design, Dundee before undertaking an MA at Goldsmiths College of Art, London. They began working together in 1989 and since then have exhibited at major galleries internationally. They were nominated for the Turner Prize in 1999.

Woodrow’s work is characterised by his use of domestic and urban objects to make sculptures in which the original identity of his materials is still evident. Since the late 1980s he has expanded his range of materials to include welded steel and cast bronze.

Most recently, his work was the subject of a solo exhibition at the Royal Academy in 2013.