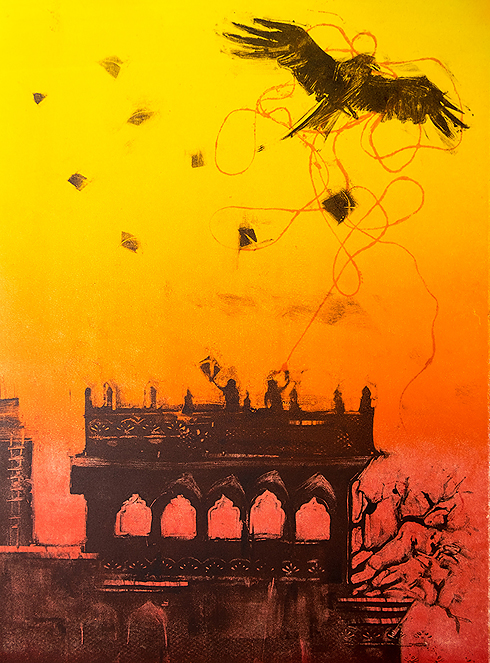 
The works in this show are inspired by a trip made to India in January 2018, particularly the ancient city of Varanasi where pilgrims come in their thousands to burn their dead on the ghats, to bathe in the sacred River Ganges as part of their Hindu rituals and to visit the many temples on offer. Varanasi is a place built upon, and still governed by, religion, rituals and myth.

Kite flying has become an integral part of the celebrations of the New Year, called Makar Sankranti, usually around the 15th January. It marks the northward movement of the earth in the celestial sphere and it is said that it is the day when the direction of the wind changes bringing with it the spring weather and plentiful harvest. Everywhere, people look to the brighter skies and watch their kites flutter in the breeze.

At ground level, another story emerges. Everywhere the debris of the kite flying littered the busy streets. Nests of tangled nylon strings choked cows and ensnared birds and monkeys. More deadly was the illegal Manja, made by taking normal kite line and coating it with glue, dye and glass, to enable the user to 'cut' their opponent's string, and claim their kite. This 'string' was as sharp as a razor and many people had already been treated for facial cuts with stories of motorcyclists cutting their throats on the deadly threads. Everywhere tattered tissue and bamboo kites floated in the already polluted Ganges river and hung from the overhead lines and trees like multicoloured mystical flags. 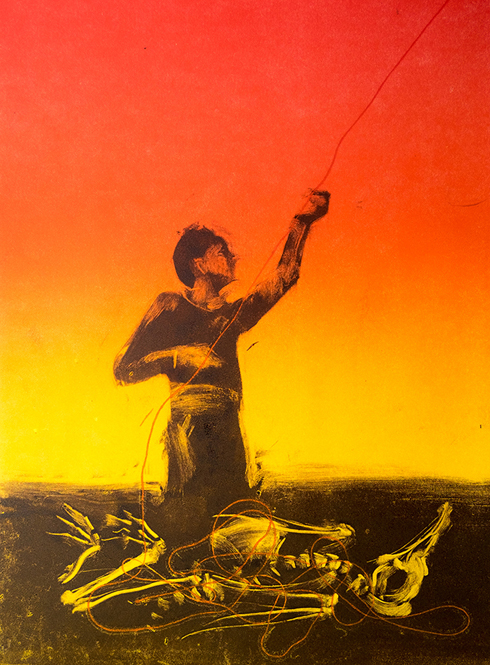 Throughout these works, I have used a theme of the red threads which represent the deadly 'manja'. The string ties the kite to it's owner, like a free thing that is tethered, until it is cut by an opponent where it then becomes the same string that binds and kills animals and people.

The central piece is based on the universal idea of the Punnai or wishing tree. The tree itself seems to be in good health but trapped in its branches are objects of man's desire. At the roots are the bones of the dead, but rather than human skeletons I have made them the bones of dogs, as these faithful animals are not valued in India as pets as 'You cannot make money from a dog', one man said. This piece is made to reflect the conflict of life and death in India, how man destroys his riches that nature has given him, but in the end, we will feed those riches back with our bodies, when we are gone.

The peacocks are the national bird of India, are representative of knowledge, compassion and beauty in the Hindu culture. Like so many things in India, the country has beauty but it is being destroyed by man's wants and pleasures. Every year hundreds of birds, wounded by manja threads are admitted to the Jain Bird Hospital in Delhi. The dead bird in these works represents the death of beauty at the hand of man. In tattoo art, the dead bird also represents a metaphysical death and therefore a transition or new beginning in life. Personally this is a perfect metaphor for my present journey as an artist. There have been small deaths in my practice to allow me to emerge as the storyteller and printmaker I am today.

Fiona Wilson graduated from The Glasgow School of Art in 1991, and after a career in lecturing, became a full-time artist specialising in figurative oil painting and printmaking. She is currently the monotype tutor at the Glasgow Print Studio and has been an active member for over 13 years. She has exhibited at the RGI, RSA, PAI open exhibitions and was pre-selected for the BP Portrait award 2016. Her work is held in private collections across the UK, USA, Australia, Switzerland and Europe as well as having multiple paintings in the Public Art collection, Art UK.