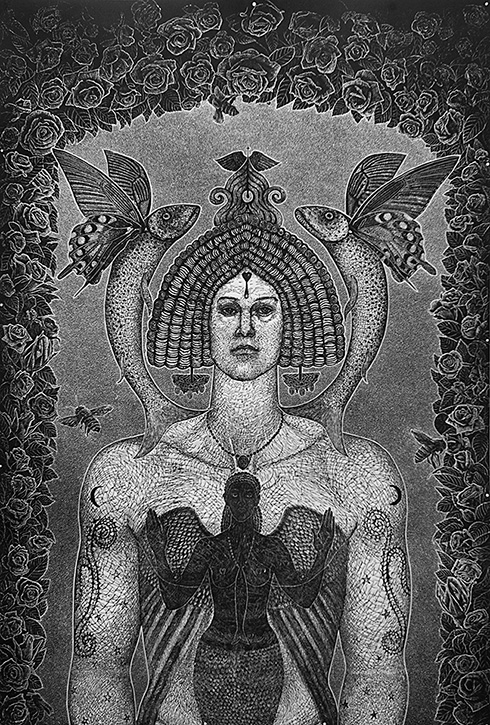 This exhibition brings together two very different artists working in print, with their own visions of a surreal nature.

Together they have created a sublime series of etchings and linocuts that combine Carey’s figures with Adesina’s landscapes, mixing the “magical realism” of the artists. 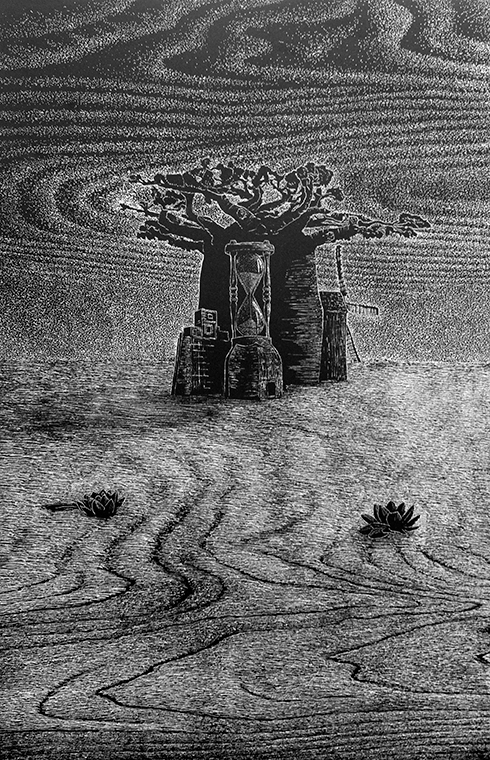 Ade Adesina, born in Nigeria 1980, is currently a full time Artist who lives in Aberdeen, Scotland. He was the Royal Scottish Academy, Artist in Residence at Glasgow Print Studio from 2013 to 2015. Previously he studied printmaking at Gray’s School of Art, Aberdeen, from 2008, graduating in 2012. He combines his African cultural roots with his British culture, producing work that makes people reflect about themselves and their histories.

Adesina creates large-scale linocuts and etchings which combine technical virtuosity with thought provoking themes and an acute sense of humour. His highly detailed prints are rich with political comment and observations. His work is a visual commentary around the ideas of ecology and our ever-changing world, in particular Adesina has a fascination with how the human footprint is affecting our planet.

"Our world is full of wonderful landscapes and I wish to highlight the continual damage caused through things such as deforestation, the politics of energy consumption, and endangered wild species.

My practice is influenced by my experiences of travel and the imagery that I encounter. Recently I spent time in Italy, Nigeria, Scottish Islands and Germany, immersing myself in different cultures and collecting a variety of imagery to use in my next body of work. I enjoy researching and visualising the differences between countries both historically and culturally. My ideas come from the new places I’ve visited and I source information from television documentaries and current affairs." 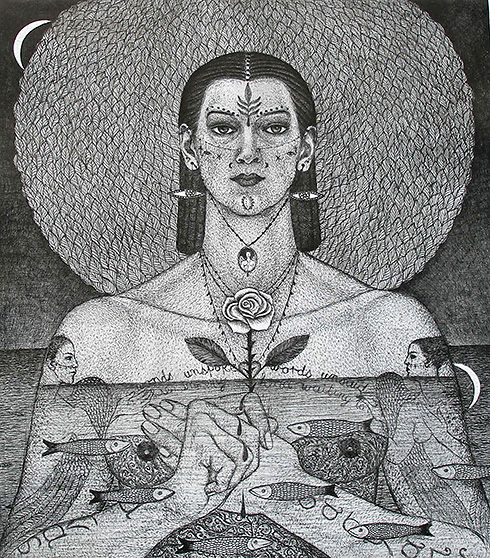 June Carey began her Art Education in the 1960s at Glasgow School of Art. In 1982 she became a member of Edinburgh Printmakers and began a lifelong love affair with printmaking. Discovering etching brought about a turning-point in her work and career. The process of making an etching set her imagination free. Suddenly shze had found her subject, and has been exhibiting her work widely throughout Britain and abroad since.

She has had ten solo exhibitions to date and has been invited to show her work in more than fifty prestigious group exhibitions at home and abroad. Co-publications of her prints include Glasgow Print Studio and Edinburgh Printmakers. Invitations include; Lecturing on her work in the UK, Iceland and Jakarta;for many years, selecting works for major Scottish Exhibitions;Scottish Arts Council selected visiting artist for schools in Scotland. She has been elected to serve on the councils for most of the major Scottish Societies since 1989.