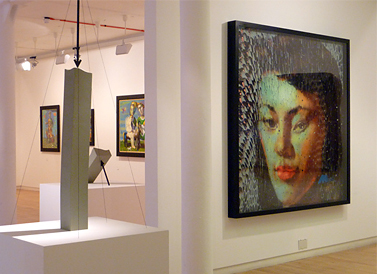 
Michael Visocchi RSA is a sculptor whose practice examines our relationship with the landscapes around us. Using sculpture and photography, Visocchi explores how we have shaped and utilised landscapes to demonstrate our political, economic and spiritual needs. In 2004 Visocchi was elected the youngest ever member of the Royal Scottish Academy. He was awarded the Jerwood Sculpture Prize in 2009.

Neil MacPherson RSA RGI is a painter resident in the North of Scotland. He studied at Glasgow School of Art 1974-78 and he is a regular exhibitor at the Royal Scottish Academy and the Royal Glasgow Institute. His surreal works have an extraordinary richness of colour with sparse compositions centred on large, dominating figures. MacPherson was elected to the Royal Scottish Academy in 2008, he is also the most recent RGI (awarded in October 2010), the award of RGI is made to artists for artistic merit and dedication to the Institute. There are only 50 RGIs at any given time.

David Mach RA RSA is a sculptor and installation artist who works in various media. Multiple mass-produced objects, most notably magazines, newspapers and car tyres, have been used consistently by Mach throughout his career. He brings diverse items together in large-scale installations with humour and social comment. His work is representational and controversial. Mach was elected RA in 1998 and in 2000 joined the Royal Academy of Arts as Professor of Sculpture.

Eileen Cooper RA is a painter and printmaker whose playful, relaxed figurative works are constructed by the use of undulating markings and a confident use of colour. The narratives are simultaneously semi-autobiographical and universal as they speak of the spiritual, emotional or creative challenges or questions we all experience. Cooper was elected to the Royal Academy in 2001, this year she selected and hung the works in the Large Weston Room of the Royal Academy Summer Exhibition.