Colin Johnstone - The Romance of Iron and Cortisone Below another sky Coalesce Comic Art: Millarworld and Beyond Ken Currie - New Etchings & Monotypes Fiona Watson - All of This is Anything Philip Reeves 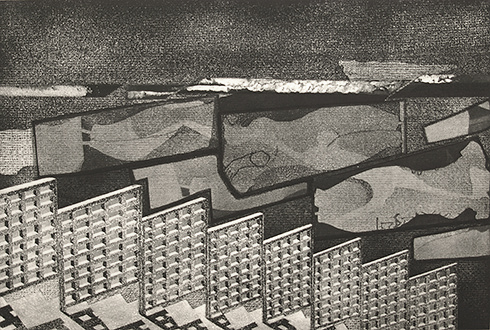 
Philip Reeves' printmaking displays a modern expressive abstraction, which is confidently conceived by experimentation with the process of intaglio printmaking. As well as experimenting with the possibilities of the etching plate, Reeves frequently employs found objects to use as the printing plate.

Reeves was integral in establishing Scotland's vibrant printmaking scene as Head of Printmaking at Glasgow School of Art in the 1970’s and as a founder member of the Edinburgh Printmakers in 1967 and then Glasgow Print Studio in 1972. He is a Fellow of the Royal Society of Painter-Etchers and a Member of the Society of Scottish Artists, Royal Scottish Academy and The Royal Glasgow Institute of Fine Arts.