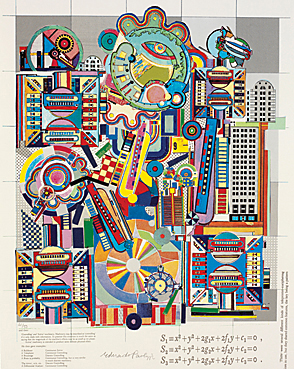 
Sir Eduardo Paolozzi RA (1924-2005) was one of Scotland's most inventive and prolific artists of the 20th Century. Born in Leith, Edinburgh, Paolozzi studied at Edinburgh College of Art and The Slade School of Art, London. Paolozzi's works, in part influenced by Dada and Surrealism, often featured collaged pictorial subjects drawn from film, magazines and commercial packaging. After 1973 his use of mass media imagery was replaced by more abstract iconography inspired by the graphic notation of sound, and later by the work of the mathematician and wartime code-breaker Alan Turing. Paolozzi's innovative use of collage translates well onto screenprint, which readily retains the collage-like effect within a larger-scale graphic work. Paolozzi was a master of the screenprinting technique and used it to create many of his most famous and memorable prints of the 1960s. These collage-based silkscreened images are among the finest examples of Pop Art, a style that he was instrumental in shaping. In addition to the range of screenprints from 1967-2005 this exhibition will feature four etchings produced at the Glasgow Print Studio workshop in 1990.